Patent No. 2,929,459Inventor: Gordon Spitzmesser, Elwood, IndianaIssued: March 22, 1960For more information, be sure to read the notes, below!

A pogo stick which is, in essence, a small gasoline motor. The connecting rod for the piston is the foot of the pogo stick, and the bouncing action fires the spark plug through a magneto. You fill the tank, turn on the switch, and bounce... and each bounce takes you higher... and higher...

Any volunteers to write the products liability insurance on this thing? 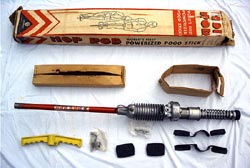 My name is Edwin R. (Dick) Spitzmesser. I am the son of Gordon Spitzmesser, the inventor of the gas powered pogo stick featured in your web site. I was 12 during the time Dad was working on this invention- he had several other patents, and many ideas (he died last May).

I would test it each time he tinkered with it. It ran on butane, but really jumped high when we once used a mixture of acetelyene and oxygen! He used a model "A" Ford spark coil which delivered quite a few volts to the unprotected spark plug - as I once found out when my zipper came in contact with it briefly. I haven't had a thrill like that since!

In 1960 or 1961 we were invited to appear on the "Dave Garroway" show in New York City. Dad was interviewed and I demonstrated the product on national television. By the way he called it the "Pop Along."

He never made any money from the invention, but he enjoyed it immensely. He was working on a car that would run on water, but would never tell me the details. Thanks for honoring him on your website.

A friend of mine was a dealer for these things back in the early '70's. I remember them very well and they were quite difficult to master. I actually got quite good at it.

If you maintained a forward leaning position you could really cover some ground. If you leaned ever so slightly to one side or the other you were launched awkwardly off with equal vigor with no hope of recovery.

The fuel as I recall was alcohol laced with castor oil a la model airplane fuel and once warmed up, the pogo would permeate the surrounding air with that distinctive smell.

My friend could step on, give a couple of hops and basically just stand there and idle ....pop pop pop. The harder you jumped, the higher the compression and greater uptake of fuel, and the bigger the pop. They also ran much better once they had heated up a bit.

I wish I had one today.

Thinking that I had a weird memory from elementary school, today I decided to check into it and lo and behold there it was.

I went to school in Belgium in the Seventies and I had a friend (whom I am now going to track down) who brought one of these contraptions to Elementary School. I distinctly remember riding this thing one time. I jumped up and down a few times and POW it kicked in and I remember being able to see into the second floor classrooms. Quite a thrill I can assure you.

Down I came in a heap and looked up to see a concerned nun staring at me. The nuns where hovering over me in the schoolyard with this look of dismay, like "not again Colin." Needless to say, I was quite the hellion when I wasin school.

Thank you for the info on your web page and assuring me that this memory was accurate. I do not recommend these things nor do I want one...Just wanted to say thanks for the warnings about those contraptions. I would love to track down the friend I had back then and see if he still has the "Hop Rod".

I have one brand new Hop Rod which has never been opened, and one which was opened and used for approx. 1 hour, just long enough to mess up one's back.

There was a story going around at the time that Goodyear racing tire engineers had redesigned the piston & port configuration and, with special fuel, were getting 12' per hop. Due to back stress, I can't see this being a popular diversion.

A very good sense of balance was required, as the hop rod still worked if you came down on an angle, resulting in one being propelled sideways. A TV personality tried one "live on air"; he got tilted a bit & it catapulted him into his desk, breaking his collarbone & wrist, if I remember correctly. I think a few incidents of this type were the cause of the Department of Transportation banning them.

Both my units were purchased for Oscar Kovalesky's Auto World, in Penna, in the 1960's. After they were banned, Oscar was selling them with some sort of plaque which outlined the history, up to and including the ban. If anyone wants one, both my units are for sale.

Thanks for an interesting & fun web site.

Another reader of this site, Bob Walker, e-mailed on July 27, 2016, to set the record straight about the "Hop Rod" product sold by Chance Manufacturing:

[The Hop Rod] was invented by three men in Wichita, KS., Herb and Jerry Ottaway (Chance Mfg. Owners) and Bud Cox. I have three of them, one with the box, a showroom poster, and two cans of Pogo-Go fuel. There were two production models I have both. The first had front and rear exhaust ports, the rear was not milled out after many hot legs and oil stained pants!

All three men are counted as friends, although Herb has passed and Bud is in a bad way. Jerry has a rack with the prototypes and both production models displayed.

Go back for more weird and wonderful patents.